Founded in 2008 and based in Grigno, in the Valsugana valley, FLY is dedicated to the production of components for the aviation and aerospace industry. In ten years the sister Company  of Forgital Group has grown from the very first 5 historical employees to the almost 200 workers currently employed and from a production site of 5000 sq./mt to a plant now exceeding 25000 sq./mt.

The host is Nadir Spezzapria, C.E.O. of Fly & Forgital Italy celebrating this event before the Company’s management and the officials representing the local establishment of Trento Province.

Since 2008, Fly has entered the market as an innovative machine shop able to completing Forgital’s production chain thus allowing the transition from the supply of single components into the supply of complete finished and fully assembled components destined to the aviation and aerospace leaders worldwide.

The choice for the site of this new Company has fallen over the Trento Province, an area nearby the mother Company, capable of providing important links to both the academic and research  world as well as a positive cooperation with the public administration. A main role in this direction has been played  by “Trentino Sviluppo” who became parts since the very beginning of FLY’s board and later provided support in several occasions to promote the growth of the Company.

The Company’s quality excellence has been appreciated in the worldwide scenario since the very beginning. In 2011 the contractual agreement with Rolls Royce  was officially signed to start the program for the production of the most efficient aviation motor ever built. This contract has given input to a major enlargement of the production site with the subsequent awarding of new projects  such as the Ariane Group space launcer and several  other motors for the aviation industry. As a result,  the turnover progressively increased with an outstanding sales volume which actually doubled year after year,  soaring from the initial few hundreds of thousands euro in the first two years of activity,  to the 154 million euro of 2017.

The increase of the business volume has also been progressively supported by the employment of new specialist staff.

FLY  – reported the C.E.O. – has really become the reality we had envisioned ten years ago and continually pursued with passion and full commitment by all of us. 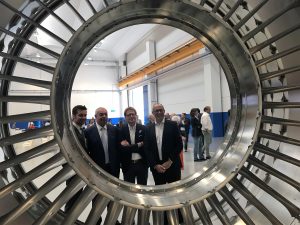 Click here to see a part of media coverage